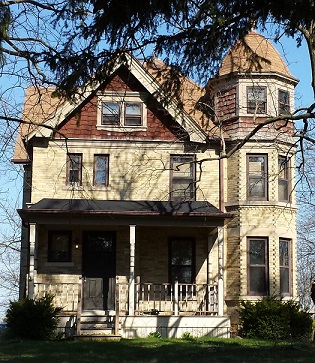 According to his biography, A(lvarus).E. Gilbert first came to New Berlin as a boy in 1839, arriving with his father Daniel and other family members from Genesee County, NY.  They initially lived with the Hollister family in a one-room cabin along with 22 other individuals until the Gilbert family ultimately built a dwelling on their own claim about a mile south of National Ave. on Calhoun Rd.  A. E. Gilbert later married one of the Hollister daughters and became one of New Berlin’s most prominent citizens. His Cream City brick “mansion”, built in the late 1890’s, still stands high atop the hill on Calhoun Rd.  It is an unusually large house that exhibits defining characteristics of Queen Anne style with multiple gabled forms, gables with shingles and decorative windows.  It has a corner tower with third-level windows including a conical roof and finial.  Of note are the large bargeboards with incised detail and the original corbelled chimney.  There is consistent use of brick on the foundation, with the design of the first and second floor of the home unusually unique for the Queen Anne style.

The home’s historic significance also stems from being the site of the first test of the firestone rubber tractor tire by Allis-Chalmers.  Additionally, on former Gilbert property located just south of the homestead, at 4908 S. Calhoun Rd. was the only round barn structure (now razed) located in Waukesha County.  The round barn was built in 1898 by Henry Schreiber.  Round and polygon shaped barns are rare, making this barn’s presence in New Berlin at the time very unique.  Round barns require only center and outer support thereby providing economy of building material.    A silo forms the interior support for the structure and provides ventilation through the cupola top thus reducing the risk of fire by spontaneous combustion.