This original Cream City brick homes was built in 1871 in the Victorian architectural style by Samuel Foster, who had been born in England in 1822.  He originally came to Wisconsin in 1845 to the Pewaukee area, settling in New Berlin in 1855 on 165 acres where he initially built a basement barn and subsequently the Victorian farmhouse, with an upright part that is two stories high, a large wing of one and a half stories, along with a one story kitchen.  It was noted at the time that the Foster family attended and supported the Freewill Baptist Church.  The farm grew to 374 acres and Mr. Foster would ride his horse around the property to survey the workers.  A notable characteristic of the Cream City brick used for the home is that it accentuates the unique double-arched windows.  The basement has all black walnut beams. There are hardwood floors throughout, a marble fireplace and open staircase in the dining room. The home has been owned by Roger and Doris Giesfeldt since 1960, who have maintained the home very well in keeping with its historical significance to New Berlin. 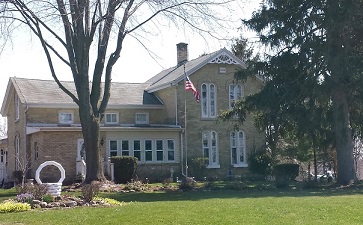