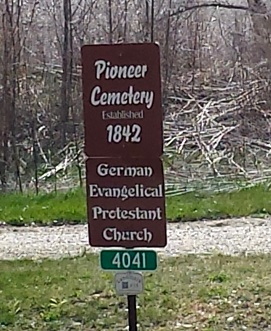 This long-forgotten cemetery of early German pioneers has finally been restored and rededicated.  Their story deserves to be told.

Many of New Berlin’s early settlers were industrious, thrifty Germans who came here seeking freedom of worship.  Christian Damm led the first group of Protestant Germans to New Berlin in 1840.  They were followed by the Korns, Lukes, Strieders, Kerns, Swartzes, Grasers and Sittels. They settled along the present Observatory, Coffee and Woelfel Roads and along Racine Avenue.  In 1842 these first Germans gathered in Christian Damm’s log house to organize their church with a Lutheran pastor, the Rev. Schmidt, a circuit-riding preacher.

The first burial was that same year when little Barbara Luke, 13 days old, died with convulsions.  Christian Damm donated some of his land for a cemetery and for the first frame church which was built in 1848.  The parsonage was built in 1852 and a parochial school, taught by the pastor, was established.  The first record listed 26 contributing families as members; within three years this list had grown to 42 families.

Pioneer life was difficult and filled with hardships.  Disease, illness and accidents were daily occurrences.  Of the 93 recorded burials, 65 were infants or children.  As was mentioned, Henry and Barbara Luke lost baby Barbara and then went on to lose six more children. The Krainers lost five children between 1859 and 1865.  According to Libbie Nolan, local historian, Jayson Swartz claims that there were no family plots in the graveyard.  When a person died, his or her remains were buried next to the grave of the prior person who had passed away.

Doctrinal differences caused the breakup of the church around 1863.  A majority of the congregation wished to leave the Lutherans and form a German Reformed church, echoing the issues that had originally caused the Germans to seek religious freedom in America.  The new church was formed, along with a new cemetery. The original Lutheran church was eventually abandoned and the cemetery became nearly forgotten, overgrown and neglected.

Between 2009 and 2012 the New Berlin Landmarks Commission was instrumental in getting the cemetery restored to honor the pioneers buried here.  Credit must also be given to other Landmark Commissions over the years, along with many private citizens who devoted countless hours trying to reclaim the land. Finally, thanks are due to the Parks Dept. of the City of New Berlin who is now maintaining the cemetery and erected the two informational signs found there. One is a complete list of documented burials; the other is the print-out of the electronic survey created by Accurate Underground Verification LLC using ground penetrating radar to show locations of burials.  The pioneers buried here will not be forgotten.

View a 3D GPR Analysis and map of the cemetery (PDF).