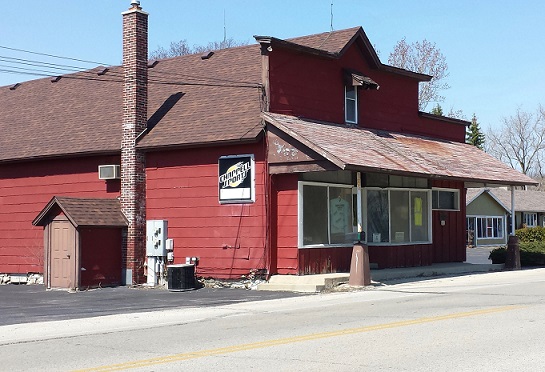 Elger’s Red Bell Market building has seen little change since it was built by Burt and John Ingersoll (sons of Dr. John Ingersoll) in 1888.  It remains uncertain who the Ingersolls built this wood frame building for, but recently discovered information tells us that George Vyvyan, son of a Cornish immigrant, owned it between 1902 and 1909.  This classic country store served the entire Prospect Hill area, selling everything from cloth to dry goods, farm tools and meats.   In 1909 Joe Elger Jr. and his will Lillian (nee Boehmer) purchased it and continued the traditional store format.

The Elger family originally came to New Berlin in the 1850s presumably from what is now the Czech Republic, formerly Czechoslovakia.  The original immigrant ancestor, Franz Elger, purchased a farm on the Calhoun Road in 1852.  Several of his descendants owned markets in the area.  Joe’s son Glenn and wife June were the last Elgers to manage the store.  On October 1, 1977 brothers Glenn and Don handed over the keys to Jack & Jean Wachholz, who operated a True Value hardware store until the early 1980s, thus ending nearly 90 years of operation as a country store.

Current owner Lennie Chappell bought the building in 1984 and is currently operating a sporting goods business.