This dwelling is situated on County Trunk Y on the south side of Prospect Hill. It is the oldest frame house in the area and the most significant historically. Both Wisconsin’s First Freewill Baptist Church and the forerunner of Prospect Hill School were founded there. 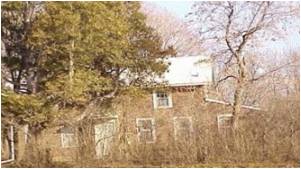 The Rev. Rufus Cheney was born in 1780 in Antrim, New Hampshire. En route to the Wisconsin Territory from his New Hampshire home, he established Freewill Baptist Congregations in New York State and Ohio. In 1837, he settled at the foot of Prospect Hill and organized his last congregation. He built his house from the walnut trees sawed across the field at Hugh Wedge’s Sawmill, the first mill in the county.

The house had a cellar, attic, two big rooms with fireplaces back-to-back, a bake oven built into the chimney, a small kitchen and three bed sinks arranged along the east wall; a well and sweep outside the northeast wall, a grape arbor in the south dooryard and orioles overhead in the elms.

On July 11, 1840, Rev. Cheney gathered his Yankee neighbors, in the parlor, to form the First Freewill Baptist Church Congregation, the first in the Wisconsin Territory. Its members were Rev. Cheney, Aretas Whitcomb, Daniel Gilbert and their wives. Initially, they met in the Cheney home, and then in a little one-room schoolhouse, built in 1844, across from the Cheney house. They continued to meet there after the school building was moved to the top of Prospect Hill in 1848; the congregation’s own church building was built in 1858-59. This church building has been cited by Waukesha County Historical Society, the New Berlin Landmarks Commission and twice by the U.S. Department of Interior’s Historic Sites Survey, in 1936 and 1997. Virtually the father of Prospect Hill, Cheney gave his community its first church, its school and then its cemetery (Sunnyside).

When his wife died, he married Lydia Moore, mother-in-law of Thomas Faulkner, county surveyor, cabinetmaker, teacher and member of Cheney’s church. A financial arrangement was made, the two families sharing the house until the Cheneys’ deaths, he on August 30, 1869, and she in 1872. At that time, Thomas reversed the stairway, removed the bake oven, built a barn, and planted an orchard. He served as church deacon, Sabbath School superintendent and school clerk for many years. He and his family lived in the home from 1853-1928.

The Milton Coopers of the pioneer Cooper family, near the Milwaukee County line, bought the house from Rufus Elden Faulkner, son of Thomas, in 1928, and raised their six children there. Following in his family tradition, he planted extensive apple orchards. The present owners of the home are Glenn and Karen Cooper.